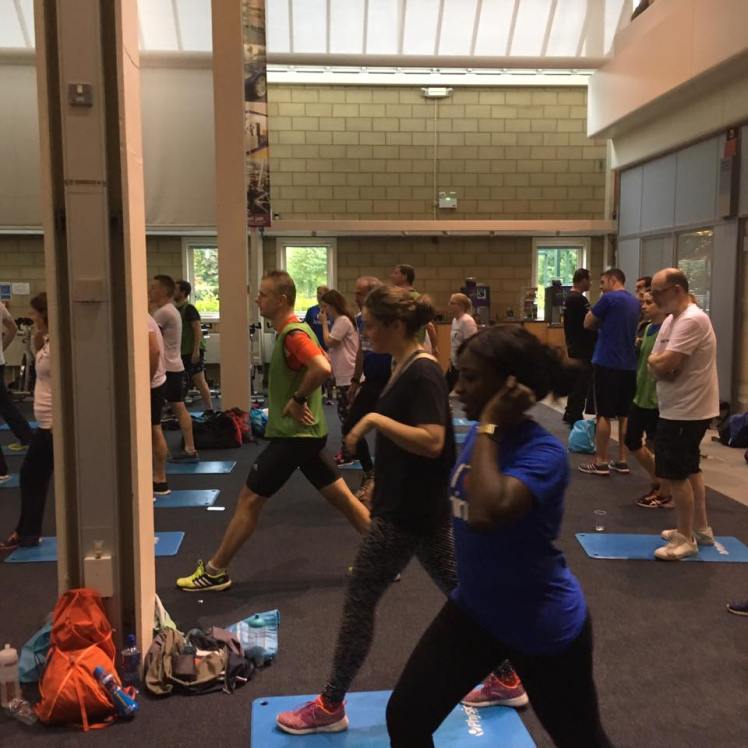 A full and fun day coupled with a super early start and a late night on Friday meant that I was most definitely ready for a good sleep when my head hit the pillow at about 11:30pm on Saturday night.  Cal and I were both pretty happy to be going to bed with blood sugars of 4.8 and 4.9 respectively so tucked ourselves up and went quickly off to the land of nod.  During dinner, one of the Animas Heroes Anna (@T1diabetesblog) had offered to give anyone who wanted it, a call at 2am to check in and for a blood sugar test.  Given that we had done a fair amount of moving about and probably not eaten the same as we usually would, a few people took her up on this offer.  As Cal and I were sharing a room anyway we decided to set a 3am alarm for a quick swipe of the libre just for interests sake really.  Both of us have always been very lucky with our hypo awareness and do a fair amount of regular exercise anyway so we weren’t worried about any nocturnal hypos that we would not wake up for.

Anyway, we were happily snoozing away (dreaming of the incredibly attractive fitness instructor from earlier in the day!) when the most deafening of sirens woke us up.  My first thought was that I had set my alarm wrong and this was a new alarm tone, Cal woke with a start and swore at me A LOT as she assumed the same thing!  We quickly came to realise that the siren was in fact the fire alarm from the whole hotel and a peek out of the window confirmed that people were gathering out in the freezing cold by the fire muster point.  We reluctantly put on some shoes and started to make our way outside.  A swipe of the libres told us that I was sitting at 3.6 and Cal was 2.2 – she told me at this point that she had been awake treating hypos since about midnight oops!  I grabbed the free biscuits from the coffee tray, shoved them in to her mouth and we went outside.  Luckily it wasn’t long before we made it back to bed and were happily snoozing away again!  If Anna had mentioned that she was going to go these extremes to wake us all up at 2am, I’m not sure anyone would have actually taken her up on her offer 😉 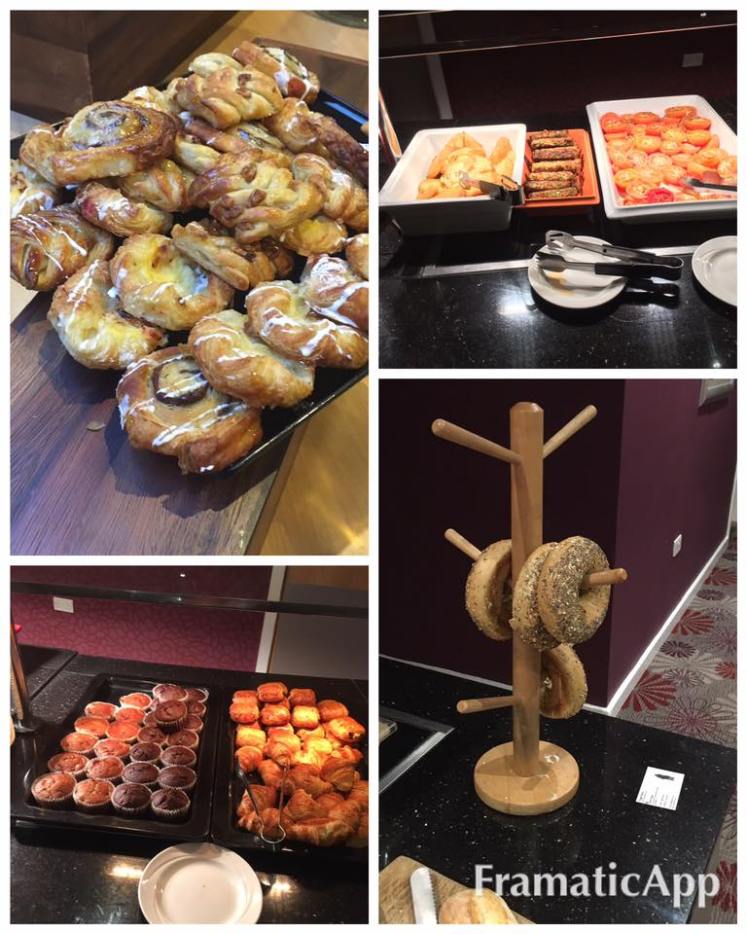 Day 2 started nice and early and we were treated to an excellent brekkie spread.  All the cereal, granola, yoghurt, fruit you could want, a cooked section which even had veggie sausages, and a highly tempting bakery section.  We enjoyed  a leisurely start with A LOT of coffee and then went back in to the lecture room for the first session of the day.

James took this session and gave a really interesting talk about nutrition and exercise in people with T1D before answering all of our questions.  He was followed by Dr Lumb who expanded on CGM’s and closed loop pump systems.  There were a variety of different knowledge levels in the room when it came to this so it was really interesting for us all to be able to share experiences and educate each other on the rapidly changing and advancing technologies available to us. 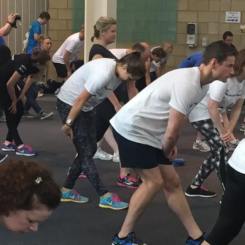 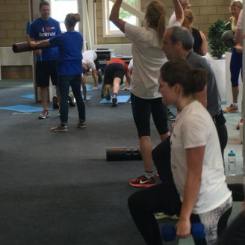 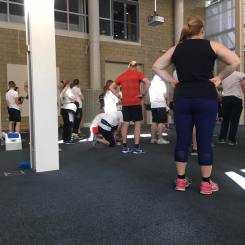 It was then time for some more exercise and we headed down to the sports facilities for a circuits session.  We had learnt that this type of exercise was likely to make blood sugar increase to start with, a concept with which I was unfamiliar, therefore, I was excited to see if this was actually the case.  I started the session on 7.8, after one circuit of 10 stations it was up at 9.4 and after the 2nd circuit it was back down to 8.0.  All a bit higher than I would usually like but I was quite pleased that it stayed steady throughout.  Yet again, this exercise session was SO MUCH FUN and the soundtrack provided by the instructors was top notch!  We finished the session with a competitive game of under and over which my team won whoooop!  We are hoping to enter ourselves in to the line game Olympics in Tokyo – will keep you posted on that one 😉

Lunch was yet again, a wide array of choice including the full Sunday roast offerings with all the trimmings.  I chose to go for the sumptuous salad buffet again and managed to resist the delicious looking banoffee pie and apple crumble! 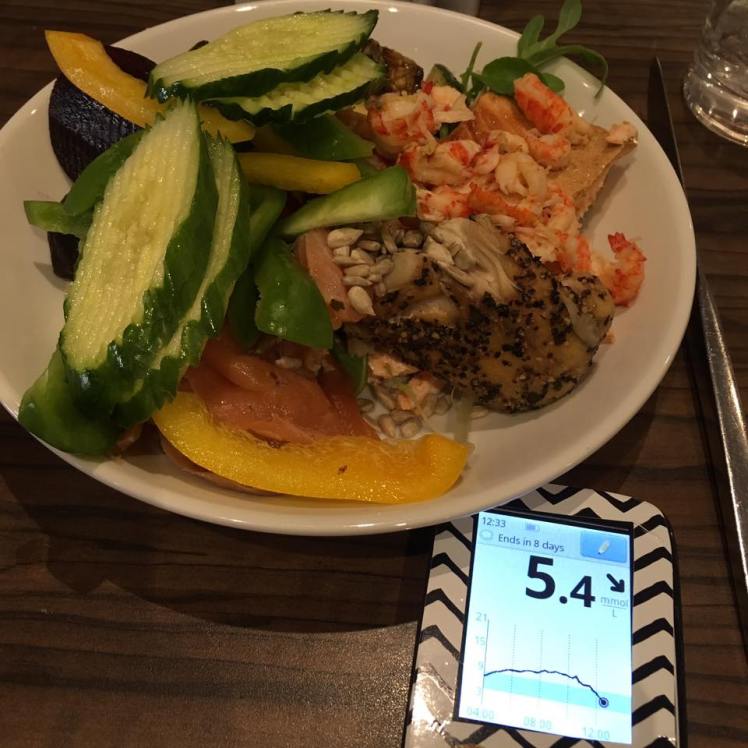 After lunch, we had some workshop discussions in our groups which was nice as it meant we got to chat in a slightly smaller group of people and hear some personal experiences from other delegates.  Each group then fed back to the rest regarding the outcomes of the discussions.  As to be expected I guess, all groups had pretty similar feedback and the overwhelming message was that people had found the weekend incredibly useful and informative as well as being loads of fun as well.  It was then time to wrap up and head home :(.  A few awards were distributed by Annie, the Animas kangaroo mascot (Cal won the most enthusiastic circuit training award!) and many thank yous were exchanged before we hopped on a train back to London. 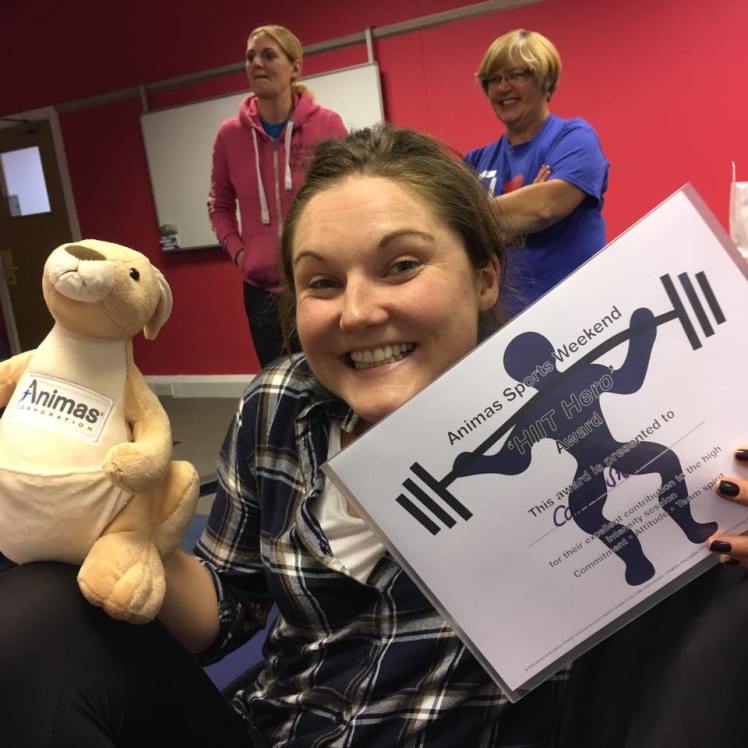 I cannot express on paper how amazing this weekend was for so many reasons.  I met people whom, even though I only spent 48 hours with, I now know will be friends for life.  I laughed more than I have in quite possibly YEARS.  I learnt so much about a condition I have been living with for so long that is going to help in maintaining steady sugars and living a long healthy life.  I was inspired by everyone else in that room not to let this disease beat us or stop us doing anything we want – if anything, this b***ard of a condition makes us a million times stronger than the average Joe Public and we should be proud to say we are living life to the full with T1D.

Thank you so much to Animas, all the staff, the heroes and of course all the other delegates for the best weekend ever – I would HIGHLY recommend this to anyone that gets the opportunity to attend.  I only wish it had lasted a whole week!!